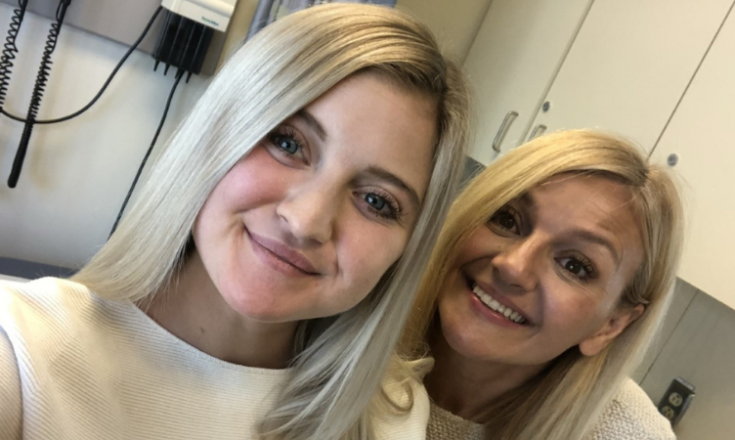 Connection to CF: Daughter with CF

I had always wanted to volunteer for Cystic Fibrosis in some way, but I could never really turn my focus towards it. I guess life was just really busy, and I was really nervous to make a commitment to something and then not be able to follow through. I also think that deep down, I was nervous to talk to other patients and parents and face the realities of the disease.

As my daughter’s health declined, 100% of my focus went towards her care. It was my every waking thought. I started to feel helpless in my ability to care for her; it was getting beyond my capabilities, and finally, the day that we didn’t think would ever arrive did. Jaimie needed a double lung transplant. As soon as I heard those words, I knew we had a story we needed to tell, and I knew it was to help others. Throughout the transplant journey, we met so many amazing people within the CF community, and we truly supported each other and were each other’s biggest fans.

Once it was time to go back to” normal life”; I knew I had to stay connected, and I knew that this was finally the time for me to get involved. The relationships meant too much, the community meant too much, and nothing else made me feel as fulfilled.

I met with Eric in the Cystic Fibrosis Canada Toronto office and learned about the advocacy program, and it was the perfect fit. It was exactly the way I wanted to contribute. The Provincial Advocate role was available, and it all just made sense; I was going to have the ability to bring the community together in Nova Scotia and work towards significant change with an amazing team. The rest is history.

This is an easy one! One of my favorite memories of being an advocate was calling a fellow advocate to let him know that Trikafta was being submitted to Health Canada.

Hearing the news was exhilarating, and it was so amazing because like the rest of our network, we had worked so hard to try and educate elected officials and the broader community about Trikafta and the challenges we were having to get it into the country. Although we were frustrated, and it seemed as if things were at a standstill, we each knew that we would never stop.

Calling Tim, and hearing his emotional response was truly one of the best memories I have. We cried together and felt a huge sense of relief; we had done it!

I remember later that day, sending out an email to the Nova Scotia team to sum up the year and wish everyone a happy holiday season. I was also able to tell them that their hard work had paid off and Trikafta had been submitted to Health Canada. It was certainly a great way to end the year 2020.

I remember thinking about how challenging the pandemic was, but how lucky I was to have had purpose and made incredible friendships within the CF community despite it. I felt completely fulfilled and incredibly fortunate.

What would access to Trikafta and other CF modulators mean to you?

Access to Trikafta and other modulators would mean that members of our CF community could watch each other live longer, healthier lives. We would be able to give people living with CF the best chance at life while they wait for a cure.

I would not have to watch my daughter, and others go through so many painful procedures, live in a hospital or be limited by an illness unnecessarily. We could watch as our community flourished and were given the opportunity to contribute to the world in any way they wanted. They have so many hopes and dreams, and so many people who love them.

What message would you like to give to your provincial government on behalf of the CF community in Canada?

If you had to watch your child or loved one deteriorate and face their own death at a very young age, and you knew that there was something that could prevent that from happening, what would you do? You would do everything you could, and you would never give up until your child or loved one had every opportunity to regain their health. We will not give up; we will no longer feel helpless in the face of unnecessary loss.

In our lives, this is not a story; it is the reality that we are living with. You have the ability to create change, and you can help. This is not a political debate; it is a chance to truly save lives. I believe that this is one example about why you wanted to become involved in public service; you wanted to create positive change. I would love to work with you to do just that.

Find out more about becoming an advocate with Cystic Fibrosis Canada.