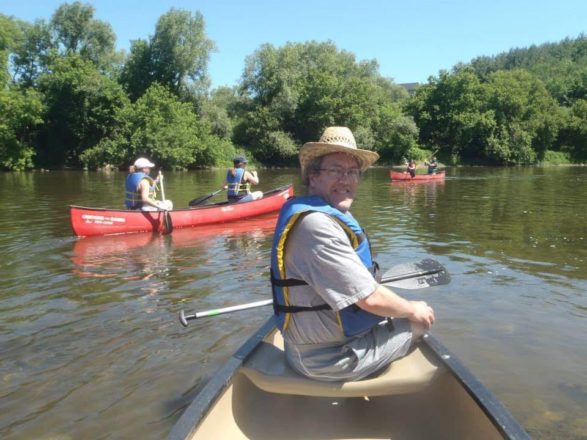 David Van Beers grew up in a family of six living on a farm in Ontario, the family had a busy household with four boys. David was the eldest, and he was born with cystic fibrosis (CF). Despite this diagnosis his childhood was similar to any other child; playing sports, enjoying games with friends – the only difference was the extra precautions and treatments he needed to do because of his CF.

David had a fearless attitude and made friends easily. He spent his spare time focused on a variety of hobbies from stamp collecting, to raising chickens. David was always out in the barn with his siblings Paul, Kevin and Bill doing his share of the work – sometimes even outworking his brothers! And by the time he left high school, David had expanded his flock of chickens to 500 birds that he cared for by himself – including a number of show birds that he was very proud of.

Despite his enthusiastic approach to life, David did experience health problems due to cystic fibrosis. Growing up he slept in an oxygen tent at night, his mother did chest percussion therapy twice daily to free up any mucus buildup in his lungs, he needed to take approximately 40 pills daily for digestion as well as to ward off infections, and when David needed to go to the hospital, his mother was always by his side to care for him. David’s brother Paul believes their mother deserves all the credit for David’s long life; even if she was feeling tired or ill, she still prioritized his care. While this was a normal part of the family’s routine, Paul still remembers the day a friend told him; “You should be nice to your brother, because he is going to die by the time he turns 21.” Paul was thirteen, and it was the first time he was made aware of how sick his brother might be.

Thankfully, that friend was wrong, and David lived well into his fifties. He worked a series of physically demanding jobs in his lifetime, and over the years did everything from loading rail cars, building pallets, installing eavestrough and building houses. David joined Kin Canada as a way to give back to the community, and immensely enjoyed the camaraderie. He loved being able to provide support to others; he would transport people to the blood donor clinics, help out at events, and held many offices with Kin over the years including President, Vice President, and Deputy Governor. Paul remembers his older brother as supportive, patient, caring, a practical joker, and always proud to celebrate his siblings’ accomplishments.

Sadly, David passed away in August 2019 at the age of 55. His impact on his family, the Goderich community, Kin Canada and the cystic fibrosis community will reach far and wide. Through Dave’s incredible kindness and a testament to how hard he worked; David left a legacy gift to Cystic Fibrosis Canada. His generous gift is a continuation of his desire to have an impact in the lives of others, and the hope David held not only for his future, but for all Canadians living with cystic fibrosis.

Thank you, David Van Beers and the Van Beers family, for this amazing gift.