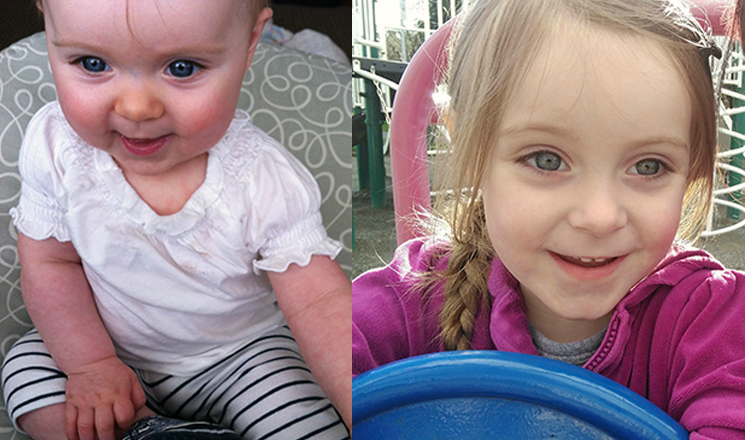 Pictured above: Amelia Ann Steeves from Victoria, BC, who was born in the fall of 2011 and diagnosed with CF by newborn screening, shown in the first picture as a baby, and in the second picture at age 4.

A recent study by a team including Cystic Fibrosis Canada’s Dr. Denise Mak, Program Manager of Healthcare, examined the impact of newborn screening for cystic fibrosis (CF) in Canada. Newborn screening for CF involves testing a blood spot taken from the newborn during the first few days of life for common CF mutations. If the test is positive, the family is referred to one of the 42 CF clinics across Canada for further testing, and upon diagnostic confirmation, education and treatment begin, typically within the first six weeks of life.

Newborn screening for CF is standard practice in several European countries, Australia, New Zealand and most of North America, with the exception of Quebec and Mexico. The authors hope that this study will provide further evidence to support advocacy efforts for newborn screening programs for CF.

Children who were not screened as newborns had higher rates of pancreatic insufficiency, which causes difficulty in absorbing nutrients from food. They also attended fewer CF clinics.

Overall, the study showed that newborn screening for CF leads to better long-term health in people with CF in the first five years of life compared to those diagnosed clinically. Newborn screening is an important part of the clinical approach to improving health outcomes for people with CF.