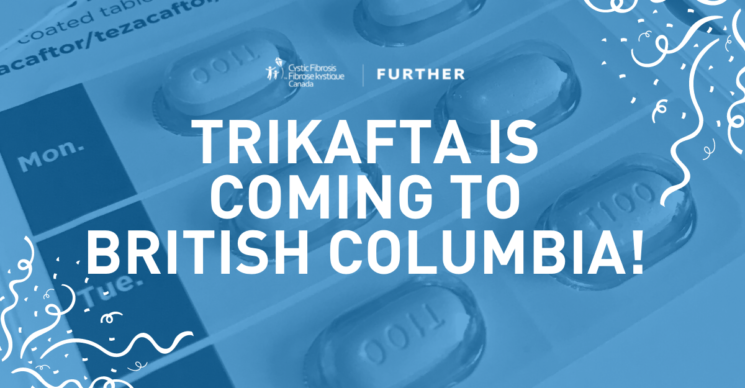 Special CF Canada Bulletin: BC announces they will fund Trikafta

British Columbia has become the fifth jurisdiction in Canada to announce they will fund Trikafta for eligible Canadians with CF. The tireless work of BC advocates has never stopped and their determination has helped to bring about this long-awaited day.

The drug approval process in BC was extended by an additional cost effectiveness review conducted by BC Pharmacare. This review usually takes place after the final recommendation for a drug is released by CADTH. For Trikafta, the reviews occurred almost concurrently, but it has still caused some delay.

We’re still confirming the official date for when Trikafta will be available in BC, however physicians in BC now have the ability to apply to the EDRD Drug Program for the reimbursement of this medicine for eligible patients.

No, BC has not specified access criteria. We are seeking clarification.

Any updates from provinces already announcing intentions to fund Trikafta?

Alberta – As of September 24th, Trikafta is available through Alberta Blue Cross Non-Group Benefits plan no upper limit of lung function for those who qualify.

Ontario – Trikafta was added to the Ontario Drug Benefit program on September 30th. Ontario has followed the guidelines for access recommended by CADTH, including the requirement for having lung function below 90%. However, the Ontario government has provided another access route, on a case-by-case basis, through the Exceptional Access Program (EAP).

Quebec – On Wednesday 29th September RAMQ, as well as all private insurers, began to fund Trikafta. The province is providing access through its medicament d’exception program. Like Ontario, Quebec has adhered to the recommendations provided by INESSS and kept the <90% lung function requirement. However, Quebec has also made allowances for those with higher lung function through the “patient d’exception” process, which assesses patients on case-by-case basis.

Saskatchewan – Saskatchewan started funding Trikafta on October 1st. Trikafta is available through the province’s Exceptional Drug Status program of the Saskatchewan Drug Plan, with no upper limit on lung function for public access.

What about the territories?

Northwest Territories – Alberta administers the Northwest Territories drug program on behalf of the Territories. We have reached out for more information on reimbursement status in the NWT and will share news as soon as we hear. to were included in Alberta’s agreement with the manufacturer for Trikafta.

Nunavut – We have reached out to determine Nunavut’s reimbursement status. We will provide an update as soon as possible.

Yukon – Often this type of announcement by the BC government would include Yukon. We’ve reached out to the drug program lead in Yukon to ask about their timeline.

No One Left Behind

Cystic Fibrosis Canada is so pleased for the BC cystic fibrosis community, who are now able to join the celebrations held by so many already across Canada. But we do not lose sight of those who are left out of today’s announcement.

Cystic Fibrosis Canada will continue to push hard on the governments of Manitoba, New Brunswick, Newfoundland and Labrador, Nova Scotia, Prince Edward Island and all Territories to get them to fund Trikafta for all who can benefit as soon as possible.

We will leave no one behind and will continue to push CF research further to ensure that everyone living with CF will one day have access to a cure.

British Columbia also announced today a new health improvement network: Cystic Fibrosis Care BC (CFCBC). The network, launched in partnership with CF Canada and the Provincial Health Services Authority, will coordinate and optimize patient care across the province. The aim is to improve the health outcomes of those living with CF in BC.