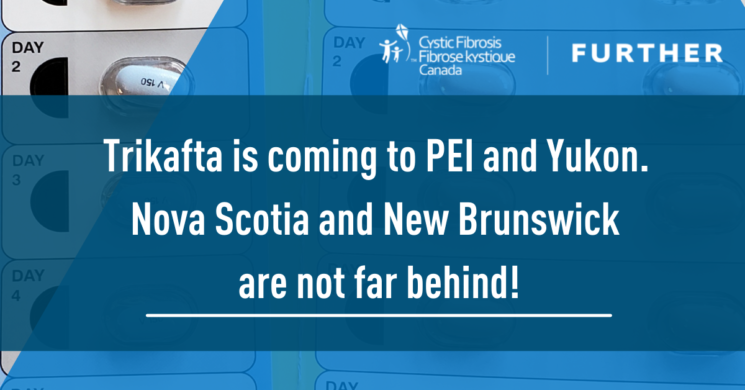 Special CF Canada Bulletin: Trikafta is coming to PEI and Yukon. Nova Scotia and New Brunswick are not far behind!

Prince Edward Island (PEI) became the first Atlantic province to officially add the drug to the formulary. In a press conference held today, October 15, the PEI government announced Trikafta will be funded for all eligible Islanders living with cystic fibrosis as of November 1, 2021. PEI has noted that more information about its listing and coverage criteria will be shared in the coming days.

In addition to PEI, Yukon became the first territory to confirm they will list Trikafta on October 15 as well. The Yukon government shared a press release stating it is in the process of adding life changing drug Trikafta, to its drug formulary.  This process is expected to be completed within the next two months.

East coast Canadians had more great news this week on October 13, 2021 when New Brunswick became the first Atlantic province to confirm its intention to list Trikafta. In a statement released to media, a representative from the New Brunswick Health Ministry said “We are working with the manufacturer to finalize the product listing agreement for New Brunswick. Upon completion of the process, Trikafta will be listed as an eligible drug on the New Brunswick drug formulary as soon as possible; we anticipate a listing of Trikafta this month.”

The good news continued in Atlantic Canada when, on October 14, 2021, Nova Scotia also confirmed its intention to list this transformational drug. In response to a question from Zach Churchill, MLA, Yarmouth and former Minister of Health, Minister Thompson stated: “The Trikafta drug will be added to the Nova Scotia formulary.”

PEI and the Yukon join Ontario, Alberta, Saskatchewan, Quebec and British Columbia in funding this life changing cystic fibrosis drug.  Congratulations to everyone who fought so hard for this moment, you deserve it.

Who is up next?

We are still waiting on the final Atlantic province, Newfoundland and Labrador, to provide this life changing drug for people living with cystic fibrosis. While the province had previously made a commitment in December 2020 to fund the drug, they have yet to honour it. We have reached out to ask them to expedite their timeline.

We have seen some good progress recently in Manitoba, details of which can be found on our Access to Trikafta by location page on our website, along with updated information on each jurisdiction in Canada. But #CFcantwait – and we won’t stop pushing until all Canadians who can benefit, have access to Trikafta.

No One Left Behind

While we celebrate the rollout of Trikafta in many locations in Canada, we are determined to ensure that no one is left behind.

You can help by sending a letter to the Premiers and Health Ministers of the jurisdictions yet to fund Trikafta. Or donate to help our research programs continue to look for a cure to help everyone living with cystic fibrosis.

We are hopeful the remaining provinces and territories will move quickly.

We’ll be going live on Cystic Fibrosis Canada’s Atlantic Region Facebook page on Monday, October 18 at 8 PM ADT to discuss the news from PEI, New Brunswick and Nova Scotia and the ways we are working to get the remaining provinces and Territories to fund Trikafta.

Watch for a step-by-step Q&A guide that we’re building to help you navigate the application process by jurisdiction. These guides will be posted on our Access to Trikafta by location page.