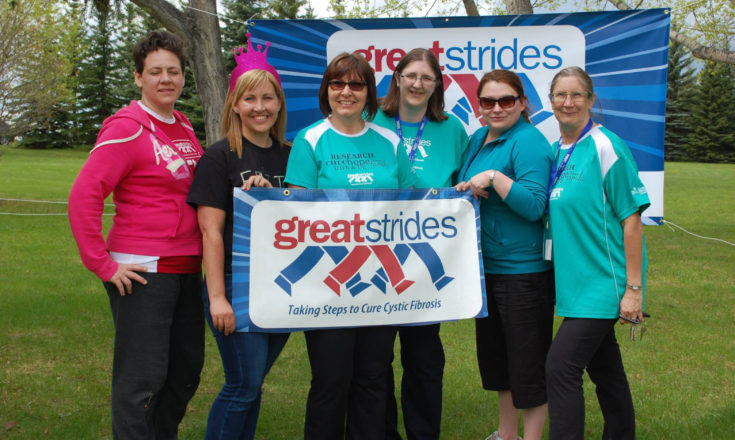 Cara has been involved with Cystic Fibrosis Canada for 14 years. In this interview she recounts her experience as a dedicated volunteer for CF Canada.

What’s your involvement with CF Canada?

I am a mom to a 15-year-old CF warrior, Calvin. I became involved with the Calgary Chapter after his diagnosis when he was 1. I began by volunteering at Bingos, and Wrapping for a Cure. Shortly after, I sat in on my first executive meeting, and met many other passionate volunteers.  It took a while for me to find my voice, but eventually, then I joined the formerly Great Strides Committee, and became the chapter newsletter editor. Today, I am trying my best as the Chapter President, as well as sitting on the Walk to Make CF History committee, and the 65 Roses Princess Ball Committee.

What has been the greatest highlight of volunteering with Cystic Fibrosis Canada?

I have attended so many amazing events over the years with CF Canada and met so many amazing people. It’s very hard to pick the greatest highlight! For me, coming up with an idea, being passionate about it, working hard at it, and then seeing it actually comes to fruition gave me such confidence and pride. If I really had to narrow it down, it would be a tossup between planning the very first Calgary 65 Roses Princess Ball, and organizing a Volunteer Appreciation Night. In both situations, I had a ton of support, but being a part of a team, and seeing these events grow from the ground up to bring others together to create joy, awareness, and funds gives me such a great feeling.  Over the years, I have been blessed enough to make new friends, build a strong support system, grow as a person, and learn new skills all while feeling like I’m making a difference for my son especially.

What have you learned from your involvement with Cystic Fibrosis Canada?

The most important lesson I feel that I have learned through my years of being involved with Cystic  Fibrosis Canada is that you are never alone.  This disease can be so isolating, and as a parent watching your child suffer, it can be so easy to lose hope and feel discouraged. But through my years of volunteering, I have watched so many people from all walks of life rally together to support our community.  Whether it’s a stranger making a generous donation to have a gift wrapped, or friends fundraising alongside you, or a fellow CF parents bringing you coffee while at the hospital, or sitting in a room full of other volunteers from all across Canada. I have learned many new skills while volunteering, and discovered a newfound confidence in myself, but this feeling that I am not alone is what I cherish most and carry forward.

What will #aworldwithoutCF mean to you?

For me, #aworldwithoutCF would mean taking my son out for ice cream without worrying about if he has enzymes with him. It would mean my girls could grow up alongside their brother without constant worry or fear, and that we could all breathe easier. It would mean I would have a chance to watch my son graduate, and marry. Maybe even have kids of his own, one day. #aworldwithoutCF would mean families and friends having more time spent together. So many lives are taken too soon because of this disease.

Support the fight for a cure!