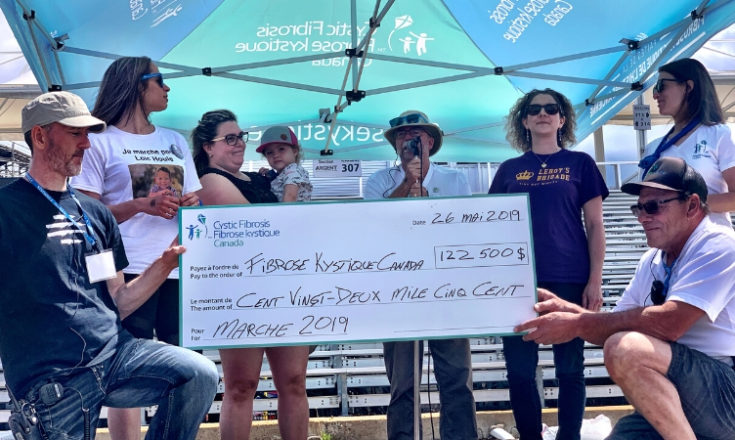 Spotlight: He would move heaven and earth to create a world without cystic fibrosis

Today, as we continue our overview of the donors and fundraisers working tirelessly for Cystic Fibrosis Canada across the country, we’re stopping in Quebec to introduce you to Daniel Dettmers who has been volunteering for the organization for 35 years. You can learn more about his story and commitment in the following interview.

Can you introduce yourself and tell us about your connection to cystic fibrosis (CF)?

My name is Daniel Dettmers, and I’ve been a volunteer for Cystic Fibrosis Canada for many years. My daughter Sarah, who’s now 32 years old, has CF. She received a pair of beautiful new lungs in 2018 and is doing very, very well.

When did you start to get involved with Cystic Fibrosis Canada?

I started volunteering for my former employer, Zellers, 35 years ago. In 1985, I helped to organize the very first Walk to Make Cystic Fibrosis History, which, at the time, was called the Moon Walk. We calculated that if every employee walked 10 km, that would cover the distance between the Earth and the Moon. By a twist of fate, a few years later in 1987, our daughter Sarah was born, and we found out that she had CF.

Daniel, what motivates you to remain so involved and not give up after all these years? Why is it so important for you to continue collecting donations?

This involvement is very important to me first and foremost because my daughter suffers from this terrible disease. When she was born, I promised myself that I’d do everything in my power to try to save her life or, at the very least, improve it. Also, the CF community is incredible. Over the years, I’ve met many people with CF and I’m still so overwhelmed by what they have to go through.

The other aspect that motivates me a great deal is the thought of the new drugs that were in development when I started volunteering 35 years ago. Today, my daughter has access to those drugs. So obviously, that’s incredibly motivating for me. When people ask me whether it’s worth volunteering, I always answer that making a commitment to Cystic Fibrosis Canada is worthwhile. The proof is that it worked: Sarah’s life expectancy has dramatically improved.

All of these promising results encourage me to continue my work. Other dedicated volunteers and families who are also involved with the cause can tell themselves that what they’re doing is paying off.

Can you share any memorable moments from all these years of volunteering for Cystic Fibrosis Canada?

That’s a tough one. There have been so many memorable moments. But there is one that comes to mind. At one point, I was no longer president of the Walk, only involved in its organization. For personal reasons, the president at the time had to withdraw from the preparations. She came to me and said: “Daniel, if you don’t take over, there won’t be a Walk this year.” So, I took over the Walk that year, and we raised $2,000 more than the previous year, for a total of $27,000. We were ecstatic, especially since we organized the event in just one month.

However, I wasn’t satisfied with the result. Indeed, when I attended national conventions, I saw that smaller cities, such as Cornwall and Hamilton, were raising incredible amounts. The following year, we did our homework and went from $27,000 to $88,000. I’m not ashamed to say that I cried. Since then, the Montreal Walk has continued to grow. This year, we raised $134,000!

I’m very proud of this accomplishment.

What does #AWorldWithoutCF mean to you?

My daughter has CF. I also fostered two girls who suffered from the disease. One of them, Vanessa, died at 21. So, in reality, it’s not only 4,300 Canadians with CF who are affected by this disease, but also 4,300 families. Mothers and fathers who are constantly worrying. I know what this feels like. I lived through the worst experience of my life last year. I still get shivers when I think about it. In January 2018, my daughter was hospitalized because she had only one remaining lung that was working at 20%. We were about to lose her. Fortunately, she received a transplant in March. When I look around me, I realized that I’m only one example among many. One person. One family. In Canada, 4,300 people are going through the same thing. Even though Sarah is doing well now, we’re still losing too many people who aren’t lucky enough to get a transplant.

I remain involved in the cause for all those families.

Support the fight against CF