His son, Chris Sperdakes, as well as friend Andrew Bartlett, along with a core group of the men who were coached by John before his passing in 2001, have spent countless hours contributing to the community.

What ran for two years as a baseball tournament switched to golf in 2005, but they began the fundraising arm by giving to Cystic Fibrosis Canada in 2010.

“We found out Paul Nurse, a close friend and player of John’s, has a daughter, Carys, who had recently been diagnosed with CF. He was going to raise money for it through a bonspiel, but when I talked to Chris, he said his dad would have loved if we contributed to Cystic Fibrosis Canada that year,” said Andrew.

“That’s the origin of where the John Sperdakes Memorial Tournament came from. Cystic Fibrosis Canada was our very first fundraising cause.”

They have picked a different cause every year since then, but now Andrew says they’re going full circle and raising money for CF Canada again this year.

“Paul is still a close friend, and we still see him dealing with the daily challenges of having a daughter who is living with CF. Helping him is a great way to raise for a cause and remember John, and it was the spark that started this,” he said.

“We were just starting out before so we wanted to return to CF and donate again now that we are more established.” They raised just $3,500 that first year for CF but have grown every year since. Last year’s donation exceeded $20,000 and the group surpassed $100,000 in total donations since they started fundraising back in 2010.

The group of men now do the golf tournament, participated on Team CF for the Bluenose Marathon Charity Challenge, do benefit nights at Finbar’s in Bedford, hold a dance, do hockey pools and more. But the golf tournament remains their largest fundraiser.

For Paul Nurse, the support being shown to Carys and the cause means everything.

“It’s an amazing event. This group of friends is spending a day in July supporting a cause so close to my heart, and it leaves me without words,” he said. “I’m just so proud of this and so happy to be a part of it.”

The invitational tournament is a way for the friends to all come together, have fun, and do something for a good cause. They always try to pick charities or causes that have affected someone in the group.

“One of the keys to being successful when doing this is picking a cause you believe in and putting the work into it,” he said. “It doesn’t matter in the end the amount that’s given, but it’s the effort put in.”

Andrew wants to ensure that through all their work and fundraising, their reason for the JSMT isn’t lost.

“We do this for John, each and every time. He was a big part of the lives of these men, and he was a role model for them. We now need to be role models for the community and our kids like he was for us,” he said. 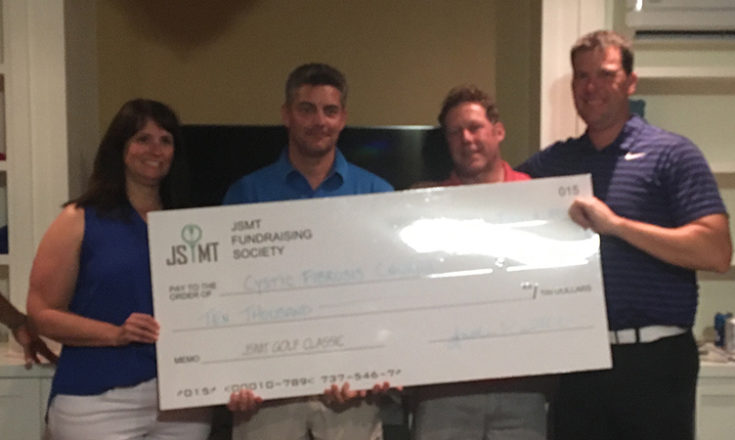