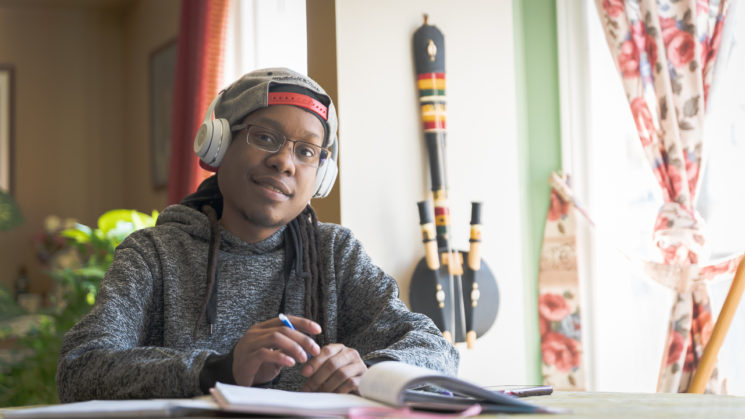 The importance of organ donors, from a recipient’s perspective

Kadeem Morgan was diagnosed with cystic fibrosis shortly after his first birthday, news that was devastating for his close-knit family. Despite living with cystic fibrosis, he grew up enjoying his childhood, embracing his family’s love of food and music. But as Kadeem grew older, he slowly came to the realization of what living with CF meant for his life; in eight grade he started having difficulty keeping up with his peers in gym and track and field. His health continued to worsen as he aged.

Kadeem needed to undergo his first double lung transplant when he was diagnosed with end stage cystic fibrosis at 20; his lungs were barely functional, and he was on life support. The wait for a donor was nerve wracking, but when a match was found, that meant hope – and a difficult surgery. Kadeem says that his happiest memory is when he woke up from his first transplant – he was very euphoric. “The average person takes breathing for granted, but the average person with cystic fibrosis wishes they were able to breath without drowning,” says Kadeem. “Without needing to cough after every word during conversation, without needing to periodically take breaks while walking or jogging just to catch our breath.”

Unfortunately, the relief of his first transplant did not last forever. In late 2020 Kadeem was rushed to the ER when he was having difficulty breathing. Doctors informed him that his body had started to reject his donor lungs. He was hooked up to a ventilator and was unable to breathe on his own. After a few days of being ventilated, Kadeem’s medical team told his parents there was very little hope of him leaving the hospital alive. But Kadeem beat the odds and became strong enough to undergo a second double lung transplant, giving him a second chance at life. The family first received a false call that a donor had been found on Kadeem’s birthday, then another call on December 24th that led to him receiving a double lung transplant on Christmas Day.

After everything he has been through, Kadeem has tried his best to maintain a positive outlook. Though cystic fibrosis has altered his life in many negative ways, he still believes it has also impacted him in positive ways; Kadeem values each breath he takes more than the average person. On many occasions he has almost lost his life, and he has also lost loved ones to cystic fibrosis as well. Kadeem frequently tells people; “CF is me, but it isn’t all of me.” It is because of the selfless generosity of organ donors that today, Kadeem is able to plan for his future.

Every year there are approximately 4,500 Canadians waiting for a lifesaving organ transplant, and each donor has the potential to save eight lives. This week, during National Organ and Tissue Donation Awareness Week, we encourage you to consider becoming a donor.