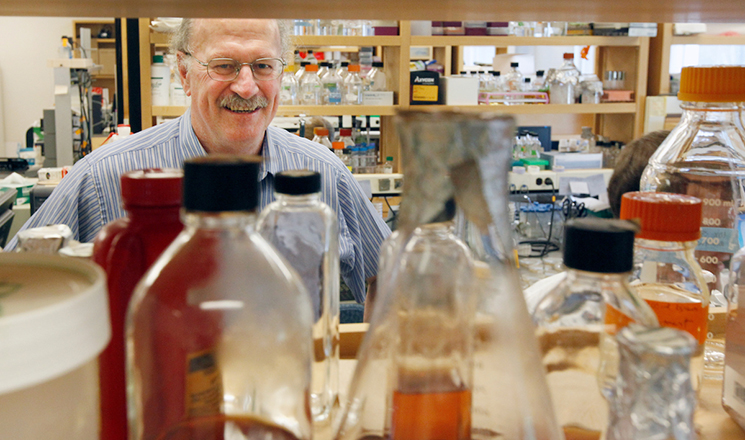 Inflammatory lung disease is the major cause of illness and death in people with cystic fibrosis (CF), caused by a destructive cycle of airway obstruction, infection and inflammation. Pseudomonas aeruginosa is the most common bacteria involved in chronic lung disease of people with CF.

In their previous work, Dr. Hancock’s team found that after exposure to Pseudomonas bacteria, the blood and lung cells of people with CF produce significantly more pro-inflammatory signals. Inflammation is part of the body’s response to infection, and is an attempt by the body to restore its natural balance after an injury or infection, but in cases of CF, an overly-strong or prolonged inflammatory response can lead to problems, including chronic inflammation and tissue damage. The inflammatory response in CF is complex and not yet well understood; it could involve many different cell types and over 2,000 genes.

In their current work, Dr. Hancock’s team attempted to learn more about what drives the inflammatory response in CF, and tested the effectiveness of a possible drug, IRD-1018, in reducing this inflammation. Their first step was to generate data to learn about key pathways involved in inflammation. They stimulated CF cells with Pseudomonas bacteria to induce inflammation. Then they analyzed the CF cells using systems biology, which looks at how key genes, proteins and cells interact with each other. Systems biology involves generating large volumes of data and then using computer programs to analyze this data to come up with hypotheses that can be tested in the lab. Dr. Hancock’s team generated data to learn about key pathways involved in inflammation.

Results of their study found that the possible drug IDR-1018 successfully decreased inflammation in CF blood and lung cells. The drug did this by targeting dysfunctional cell self-destruction mechanisms, preventing the cells from destroying themselves. The development of drugs that target these cell self-destruction mechanisms could provide a new way of treating inflammation in people with CF.

Bob Hancock is a Professor of Microbiology & Immunology at UBC, an Associate Faculty Member of the Wellcome Trust Sanger Institute and a Canada Research Chair in Health and Genomics. His research interests include the development of new treatments for antibiotic resistant infections, and antibiotic uptake and resistance. Dr. Hancock is an Officer of the Order of Canada and served as the chair of Cystic Fibrosis Canada’s Medical Science Advisory Committee from 1990-1993.