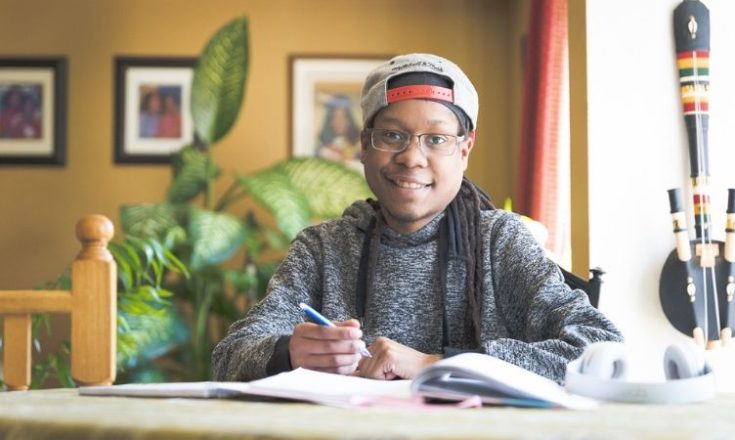 My name is Kadeem Morgan, I’m 22 years old and live in Pickering, Ontario. I was diagnosed with cystic fibrosis at one year old. I had all the symptoms of CF, but because newborn screening wasn’t yet implemented and because CF isn’t common in people of African descent, it took a while for my diagnosis. Sometimes I wonder how my health would have been if I was diagnosed earlier.

Two years ago, I received a double-lung transplant that changed my life. My health had declined so much that the medical team and my family feared I wouldn’t make it long enough to receive the call for lungs. Thankfully, I received the call and my new lungs have changed my life in ways I never imagined.

As a kid, I was never really keen on telling people I had CF for a number of reasons. Growing up, I had a friend who had cancer and I saw how people labelled her as the “sick kid.” I wanted to avoid that label, and didn’t want my friends at school to pity me or think of me that way. CF also is so uncommon, that I was afraid people would over-dramatize my hospital admissions and come to their own conclusions about the status of my health. My mom always used to say a hospital stay is just a “tune up”, but I knew my friends at school wouldn’t understand.

And so, I lived the first 20 years of my life hiding that I had CF. CF was hard to hide. There were times where I was away two or three months of the school year, and I would tell people I was just on a vacation. Getting admitted, unfortunately, was such a normal part of my life, and back then, so was keeping my illness a secret. People would ask about my cough, but I would brush it off and try to change the subject.

And then the transplant changed everything. Because I was the sickest I had ever been, I felt like I had no reason to hide CF anymore. And if I was going to have a transplant, people would find out anyway, and I would rather them find out on my terms.

I have found freedom in embracing my illness. My double-lung transplant was a rebirth for me both physically and emotionally. It opened me up to a world where I no longer hide my truth, I embrace it.

Finally telling my friends that I had CF was a huge relief. It relieved a lot of stress in my life and I wish I had been open sooner. I’m grateful that new lungs have given me more years of life so I can pursue my dream of becoming a motivational speaker. I hope to inspire others to own their story and accept their reality, just like I have. Music is a real passion of mine and kept me sane during the times my health (and my secrets) were driving me crazy. The truth really does set you free.

Join us in making a difference for people living with cystic fibrosis!

Register or donate to the Walk!