April 20, 2017 - THE FIGHT TO MAKE ORKAMBITM ACCESSIBLE AND AFFORDABLE CONTINUES

Health Canada’s approval of ORKAMBITM for children with cystic fibrosis (CF) aged 6 to 11 years means that they could stand a better chance at living a longer, healthier life. Approximately 267 Canadian children with CF could benefit from access to this breakthrough treatment.

"Like Kalydeco® before it, ORKAMBITM treats the underlying defect in cystic fibrosis, but for a much larger part of the CF population. Health Canada’s approval of ORKAMBITM for children between the ages of 6 and 11 years is an important step in getting this new medicine into the hands of the people who need it most.  Early intervention is key to better health outcomes. The earlier we can treat the basic defect of the disease, the more likely we can slow its progression,” says John Wallenburg, Cystic Fibrosis Canada’s Chief Scientific Officer.

ORKAMBITM improves lung function and significantly reduces the rate of pulmonary exacerbations, which can lead to frequent hospitalizations and accelerated lung disease. It is the second drug approved by Health Canada that targets the underlying cause of CF. Kalydeco® (as a single therapy) was the first. For a CF patient with two copies of the F508del mutation, access to ORKAMBITM could drastically improve their quality of life.

While Health Canada’s approval is a step in the right direction, Cystic Fibrosis Canada remains cautiously optimistic about working with Vertex, the manufacturer, and the provincial drug plans to ensure access to ORKAMBITM is made available to eligible CF patients between the ages of 6 and 11 years across Canada.  Health Canada approved ORKAMBI™ for use in CF patients ages 12 years and older who have the homozygous F508del mutation on January 26, 2016. To date, no provinces have made the drug available to those who need it.

Although Health Canada approved the drug for efficacy, safety and quality, the Canadian Agency for Drugs and Technologies in Health (CADTH) Canadian Drug Expert Committee (CDEC) gave the drug a negative recommendation for use in CF patients ages 12 years and older in October 2016, then reconsidered ORKAMBI™ in February 2017, during which it determined that new clinical information in the support of efficacy of the drug must be from a randomized controlled trial. CDEC will not accept any other data, even real world data collected after people have been on the drug for some time. Cystic fibrosis is a rare disease; as such, meeting the CDEC data requirements is a challenge.

Cystic Fibrosis Canada is calling for a compassionate and timely approach from the drug manufacturer and drug plan administrators when it comes to making ORKAMBITM accessible to the Canadian children with CF that would benefit from this life-changing treatment.

Cystic Fibrosis Canada is one of the world’s top three charitable organizations committed to finding a cure for cystic fibrosis and is an internationally-recognized leader in funding CF research, innovation, and clinical care. We invest more funding in life-saving CF research and care than any other non-governmental agency in Canada. Since 1960, Cystic Fibrosis Canada has invested more than $235 million in leading research, care and advocacy, resulting in one of the world’s highest median survival rates for Canadians living with cystic fibrosis. For more information, visit www.cysticfibrosis.ca.

For more information or to set up interviews with spokespeople, please contact:

With her sparkling eyes, gentle smile and joie de vivre, Tamy often leaves others in disbelief when they find out that she has cystic fibrosis. 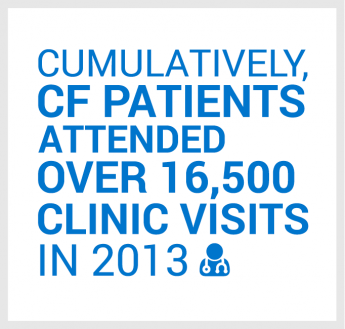