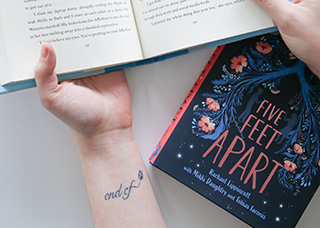 Did you see Five Feet Apart?

Five Feet Apart is a movie about two teenagers living with cystic fibrosis. Released on March 15, the movie follows the story of Stella Grant (Haley Lu Richardson) and Will Newman (Cole Sprouse), who meet at the hospital and fall in love. Because people who live with CF must maintain a distance of six feet to avoid passing potentially deadly bacteria to one another, Stella and Will struggle with the temptation to throw the rules out the window and embrace that attraction while maintaining their medical treatment. Although Cystic Fibrosis Canada was not involved in the development of the film, we are excited by the potential that Five Feet Apart has to increase awareness of cystic fibrosis.

Do the characters in the movie have cystic fibrosis (CF) in real life?

No, the actors in the movie portray characters living with CF. To read the stories of Canadians living with cystic fibrosis, head over to our blog or read our magazine, Connections.

What is cystic fibrosis?

Cystic fibrosis is the most common fatal genetic disease affecting Canadian children and young adults. At present, there is no cure. CF mainly affects the lungs and digestive system but the degree of severity differs from person to person. The persistence and ongoing infection in the lungs, with destruction of lungs and loss of lung function, eventually leads to death in the majority of people with CF.

How do you get CF?

Cystic fibrosis is a genetic disease, meaning a person is born with it.

CF occurs when a child inherits two abnormal genes, one from each parent. Approximately, one in 25 Canadians carries an abnormal version of the gene responsible for cystic fibrosis. Carriers do not have cystic fibrosis and they do not exhibit any of the symptoms of the disease. It’s estimated that one in every 3,600 children born in Canada has CF.

Why shouldn’t people with CF be together?

In the movie, we see Stella and Will struggle to spend time together. That is because to prevent the spread of lung infections from one person with CF to another, it is recommended that people with cystic fibrosis not be around each other. Simply put, there are bacteria in the environment that don’t affect people without CF, but that can have serious, potentially fatal, effects on those who do have CF – and these bacteria can spread between people with CF. A copy of CF Canada’s Infection Control Policy can be found (here).

How could infections spread among people with CF?

When people with CF get too close to each other, bacteria from one person’s lungs can spread through saliva droplets to another person. This can cause the spread of infections, which can lead to lung damage and death. Infections among people with CF can also spread through indirect contact. For example, if someone touches something with germs already on it, such as a door handle, and then touches their eyes, nose or mouth. Germs can also be spread among people by sharing items like glasses or pencils.

How much distance should people with CF keep from others with CF?

It is recommended that people with CF should stay at least six feet away from other people with CF. This reduces the chances that harmful bacteria will spread from one person with CF to another.

Can I go near someone with CF without making them sick?

If you have a respiratory illness such a cold or flu, you should avoid being near someone with cystic fibrosis. Studies have shown time and time again, the best way to prevent the exchange of germs is by washing your hands frequently, using the proper technique.

For more information on cystic fibrosis, visit these resources on our website:

Check out inspiring stories from the Canadian CF community