Please see below for available airway clearance techniques. Techniques are recognized by the International Physiotherapy Group for Cystic Fibrosis (IPG/CF) as being evidence based. 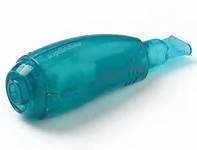 This technique involves breathing repeatedly through a device which causes pressure and vibrations in the airways to help loosen and move mucus. The Acapella and RC Cornet can be used while the individual is placed in any position. 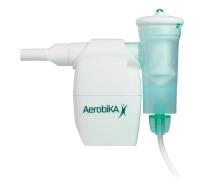 The Aerobika® device is a drug-free, hand held mechanical oscillating positive expiratory pressure (OPEP) device. It’s orientation independent – so it may be held in the most natural position.

The Aerobika® device can accommodate small volume nebulizers such as the AeroEclipse® XL Breath Actuated Nebulizer (BAN), as seen in the image, for combined aerosol treatments. The AeroEclipse® XL BAN puts you in control of your therapy.  Aerosol is only produced when you breathe in – allowing for breaks in treatment without drug loss.

This technique involves breathing repeatedly through a device which causes pressure and vibrations in the airways to help loosen and move mucus out. The Flutter can only be used in an upright position such as sitting or standing. 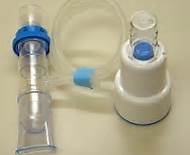 Individuals breathe through a face mask or mouthpiece attached to a piece of equipment called a resistor, which causes pressure to build up in the lungs. The pressure keeps the airways open, allowing air to get behind the mucus. Mucus can then be moved to the main airway and be cleared.

An individual is placed in a variety of positions to drain mucus from different parts of the lung. Chest clapping, or percussion, is often added, along with deep breathing exercises, huffing (actively exhaling but less forceful than coughing) and coughing to help clear mucus from the airway. Modified non-head down positions are now used as the standard of care.

These techniques are listed in the IPG/CF booklet Physiotherapy for people with Cystic Fibrosis: from infant to adult. For more detailed information, download the Blue Booklet on Physiotherapy Techniques.

The following techniques are newer and require further research/studies. 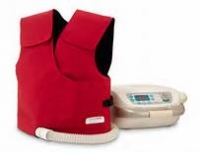 An inflatable vest is attached to a machine that makes it vibrate, which loosens the mucus in the lungs. After using the vibrating vest for several minutes, the individual stops the machine and coughs or huffs to clear the airway. This procedure is repeated 5 or 6 times.

This machine provides pressure through both mechanical and sound waves to the chest, causing airways within the chest to vibrate, loosening the mucus, and allowing it to move into larger airways and be cleared.

Cardiovascular, strengthening and stretching exercises form the three major components of a balanced exercise program. Cardiovascular exercise (also known as aerobic exercise or endurance training) involves moving the larger muscle groups to increase a person’s heart rate for a prolonged period of time. This form of training is generally performed at a lower intensity. Some examples of cardiovascular exercise include fast-paced walking, jogging, running, swimming, cycling and aerobic classes.

Strengthening exercises (also known as resistance or weight training) involve applying load to the muscles to make them stronger. This involves using some kind of weight or resistance, e.g. dumbbells, resistance bands or even a person’s body weight.

Both cardiovascular and strengthening exercises have the added benefit of increasing ventilation and opening clogged or collapsed airways, allowing mucus to be loosened. If this is combined with airway clearance therapy, then the mucus can be transported up the airways to be cleared.

Stretching exercises (also known as flexibility training) help to increase the range of motion of the muscles and joints. They are commonly performed after exercise to help minimize the chance of soreness and muscle injury. They may also be useful as part of a postural program to correct muscle imbalances that are common in people with cystic fibrosis.

Contributions from: Erika Szego and the Canadian Physiotherapy Group

Cystic Fibrosis Canada is aiming to expand the reach of clinical knowledge beyond our specialized CF Clinics, so that every Canadian living with cystic fibrosis receives the care they need, when they need it. Particularly given cystic fibrosis is a rare disease, it is important that there is a deep and ever evolving understanding that is also shared beyond CF clinics, in hospitals and other stops in the medical journey. With that goal in mind, we have worked with leading experts across the country to develop standards of care that will provide relevant information in a Canadian context, and can be referenced as needed by any healthcare provider.