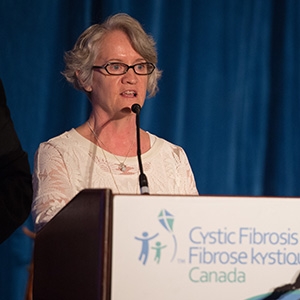 Back to Listing
Rita Steiner
Going Above & Beyond for CF: South Saskatchewan

Rita Steiner first became involved with Cystic Fibrosis Canada’s South Saskatchewan Chapter more than 30 years ago after her son Michael was diagnosed with cystic fibrosis (CF). Rita has contributed to the CF cause in many ways, from building major gift activities and sponsorship opportunities to contributing to several local events.

Her son Michael unfortunately lost his battle to CF while waiting for a lung transplant in 2002, but Rita remains wholeheartedly committed to finding a cure or control for cystic fibrosis. To this day, Rita remains one of Cystic Fibrosis Canada’s most active and adored volunteers.

A natural leader and self-starter, Rita has held almost every position at the Chapter level, serving as the Regional Director for Saskatchewan and Regional Representative on the Stakeholder Council and the Chair of the National Awards committee. From garage sales, bingos and other events, Rita has helped raise thousands of dollars for CF research and care over the years. She has been a key member of the Advocis Golf Tournament Organizing Committee for more than 14 years, a fundraiser that has raised over $200,000 for Cystic Fibrosis Canada to date. For more than ten years, Rita has also been the Chair of the Great Strides™ Walk Committee and has helped to grow the event and achieve record totals in Saskatchewan – making it the largest walk in the Prairies region.

What impresses those most who know Rita is her ability to stand so strongly at the front lines and continue her involvement with Cystic Fibrosis Canada when it would probably be easier at times to step away.

Thank you Rita for everything you do. Cystic Fibrosis Canada is incredibly fortunate to have you as a volunteer.