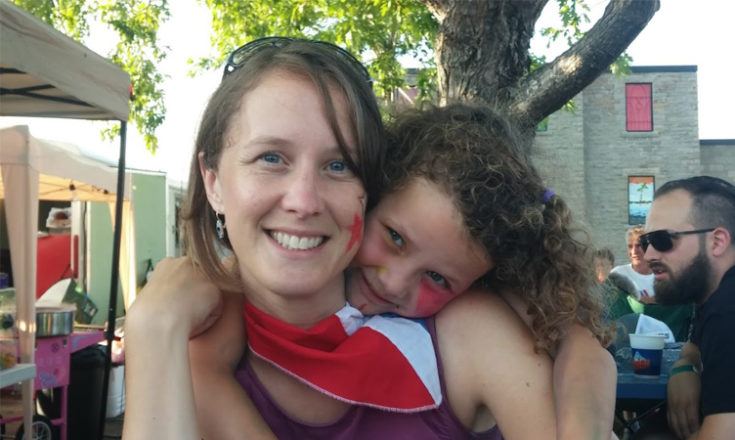 Province: New Brunswick
Connection to CF: I am the mother of Jasmine Roussel, a 12-year-old girl with cystic fibrosis. She was diagnosed when she was a year and a half years old.
Years advocating: I have been provincial advocate since January 2021, and regional advocate since the CF advocacy program began.

I have been deeply involved with Cystic Fibrosis Canada since my daughter’s diagnosis 11 years ago. I was mainly involved with fundraising. I have always believed in equity, which is what drove me from 2014 to 2016 to work on behalf of the New Brunswick CF patients waiting for lung transplants who had no access to reasonable and fair financial assistance. More recently, I felt the need to do more to ensure a future for my daughter and the advocacy program allows me to become involved at several levels.

Before becoming an official CF Canada advocate, I spoke out for patients waiting for lung transplants who had to leave the province to be treated. Transport services are not offered in New Brunswick. Patients receiving care in Quebec did not receive the same financial assistance as those who decided to go to Ontario. There was systemic discrimination between French- and English-speaking patients in New Brunswick. With a lot of help from the New Brunswick Lung Association, after several years of efforts, we finally won our battle. There is still work to do, but at least now, French-speaking patients get the same financial aid as the English ones.

Since I officially became an advocate for Cystic Fibrosis Canada, I have been working to get the New Brunswick government to offer Trikafta and the modulators to everyone who needs them within a reasonable amount of time. It is my greatest hope to make a difference. Another important objective for me is to have an effective and fair process for access to medications for rare diseases be instituted and for people living with rare diseases to no longer have to fight for access to medications or therapies. That situation has to change.

What would access to Trikafta and other CF modulators mean to you?

Access to Trikafta would allow my daughter to grow up healthy. She is 12 years old and her health is still good. Trikafta would allow her to live a normal life, without frequent hospitalizations and without her body being slowly destroyed by the astronomical quantity of drugs and antibiotics she has to take now and will be taking every year in the future, due to repeated lung infections.

What advice would you give to a new volunteer advocate?

Don’t hesitate to become involved from fear that you can’t do enough or that you don’t have the time or energy because every action counts. We are all human beings, we can only do our best, but together, we will make a difference. There’s a quote from Margaret Mead that I adore: “NEVER DOUBT THAT A SMALL GROUP OF THOUGHTFUL, COMMITTED CITIZENS CAN CHANGE THE WORLD; INDEED, IT’S THE ONLY THING THAT EVER HAS.”