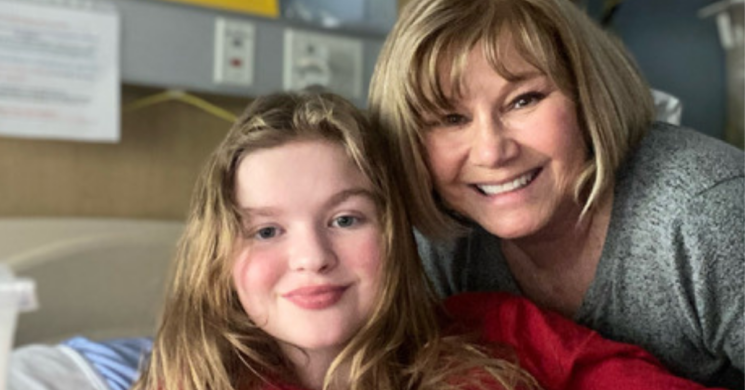 5. Why did you get involved with CF Canada’s advocacy program?

I got involved when I was a CF Chapter board vice president. I was brought up to speed on everything that was happening with advocacy at the national level, and I spoke to Chris Black from BC about what we can do in Alberta. At the time, there was a big focus on Orkambi, and this was a modulator that my daughter needed so it made sense for me to help. But I also felt a strong urge to help others because being part of the board gave me the opportunity to meet with a lot of other CF families. I asked Kim Steele, “What can I do?”, and started working with the provincial advocate at the time to try and bring Orkambi to Alberta. It was a big challenge because I remember my daughter was getting so much sicker – to the point where she was spending most of her days in the hospital and there were discussions of a lung transplant. Trying to balance being a mom, caregiver, and an advocate was a lot, but I felt it was necessary. I knew it was the right thing to do. It was also a big change for me because I used to focus on fundraising and awareness with the public, so dealing with politicians and government officials was something I had never done before. Overall, I’m glad I went out of my comfort zone because look where it got me.

6. Describe your fondest memory as a CF advocate so far.

My fondest memory was our 100 letters for 100 days campaign we launched in December 2019 in Alberta.  This campaign was to get our voices heard to our provincial health minister and to have a meeting with him to discuss the current CF issues, in particular access to modulators. We set a goal of 100 letters all being sent on the same day to the health minister, asking him for a meeting within 100 days.  To our great surprise, over 400 letters were sent.  Initially we were denied a meeting but with determination and creative thinking and a strong advocate who would not take no for an answer ,we were able to get a meeting with the minister’s chief of staff in February.  From that meeting he agreed we should meet with the health minister and in April 2020, it happened.  He listened to us and stated he wanted to work with us. Multiple challenges along the way did not defeat us one bit.  The outcome of the 100 letters for 100 days campaign has been a year of ongoing communication with government officials and the minister.  Now, discussions around Trikafta have been added to the meetings.

7. What would access to Trikafta and other CF modulators mean to you?

Having access to Trikafta, Orkambi and Kalydeco would mean the ‘toolkit’ for physicians would be stocked. They are the ones who prescribe what is needed for each of their CF patients, and modulators should be part of that that. It would provide us with hope for ongoing health stability and stall the progression of the disease. It could mean adults with CF can look forward to the future instead of worrying if this may be their last year. Children with CF don’t have to miss out on being kids, and they’ll be able to do more things that they enjoy. It can provide real time, evidence-based data for research, so that we can join with other countries to show that modulators work. It could also mean that CF Canada can focus on other important issues affecting the CF community, such as mental health support and support for the 5% that cannot use modulators.

8. What message would you like to give to your provincial government on behalf of the CF community in Canada?

I would like my provincial government to know that the CF community in Canada is a strong, determined, and knowledgeable group that understands cystic fibrosis better than anyone. They have endured many years of battling this disease, always hoping for a cure, and they won’t stop fighting for one. Cystic fibrosis is a fatal, genetic disease that revolves around multiple medications, daily respiratory therapy, and numerous hospital admissions, but it does not have to be that way. These are encouraging times for the CF community. Since 2012, there are now the first-in-kind, genetically tailored, disease-modifying therapies that can treat the basic defect of CF, rather than just the symptoms, and it gives the community a lot of hope. For the past 8 years, we have been going through an uphill battle to get these innovative therapies into the hands of those who need them as medications to slow down the disease progression, and to stop it before it even starts – rather than a rescue medication when someone’s life is on the line. We need the government to work with us, hear us, and help us.

9. What advice would you give to a new volunteer advocate?

My advice is to know your story and why you want to advocate. When you have a story, you have a stronger connection to advocacy. I like when I meet new volunteers and they share their stories with me, because I get a stronger understanding of who they are and what they care about. When I hear their tones and expressions, I can learn what they like and dislike. Often when I tell people stories about what we do, I can tell they also want to do the same. I can also hear how angry people get when I talk about the challenges we deal with. So I believe that story-telling and making personal connections is really powerful.

Another piece of advice is to be you – don’t try to be something you’re not. If you’re not good at public speaking, then be honest. There are others out there who can be your voice. If you have strong opinions or advice about something, say them. We are always learning from one another and I think it’s nice to hear each other’s thoughts. Finally, I would say, try and go out of your comfort zone. I know this can be one of the hardest things to do, but so worth it when you get what you want to achieve. Celebrate your wins and learn from your losses.

10. How do you want to support your fellow advocates during the provincial meeting challenge?

I want to support my fellow advocates by being available to help educate, empower, and engage. I want to assist if they need my support in any future meetings with government officials, so they know they are not alone. I’m happy to help by providing them with information so they have all the details they need to feel confident in their discussions, and to motivate in any way that I can because I know advocacy can be challenging. I believe that I can support other advocates by keeping them updated on what I know so they can also feel the same momentum. I can also learn from other advocates, as I’m always up for a discussion or chat. I am very fortunate because the Alberta advocacy team is such a great and strong group that has done so much for people with CF. They all have such strong expertise and make my work very easy. We are all partners in the same cause and my role is to help with messaging, updating information and key materials that they’ll need to make their advocacy work the best it can be.

Join the #CFcantwait Provincial Meeting Challenge and advocate for access to life-changing CF drugs, including Trikafta.