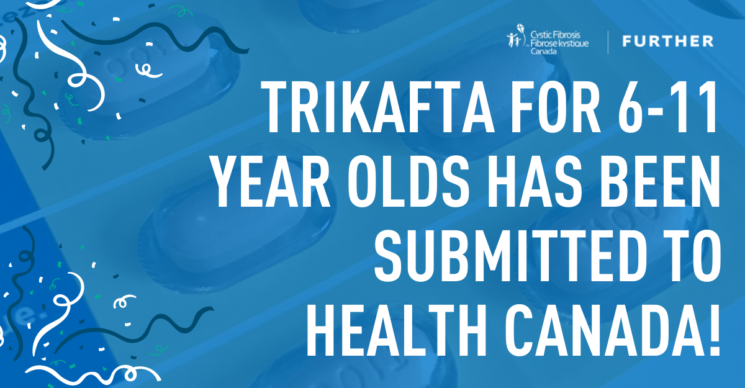 Great news! Trikafta has been submitted to Health Canada for children aged 6-11! The good news just keeps coming because Health Canada will process this as a as a priority review, meaning the review should be completed within 180 days, or before the end of April.

Vertex has also stated they are seeking an aligned review with CADTH and INESSS, which will allow these health technology assessment bodies to conduct their reviews in the same timeframe as Health Canada. Both priority and aligned reviews were granted for the 12+ year old application that was approved in June 2021.

In a letter to Cystic Fibrosis Canada, Vertex has also indicated that once the Health Technology Assessments are completed, the Letter of Intent signed with the PCPA, initially for Kalydeco and Orkambi, and then extended for Trikafta 12+, may be extended again to include those 6-11.

Thank you to everyone who is fighting so hard for access to this transformational drug. This will make a difference in the lives of many children living with CF. We will also continue our efforts to ensure all people who need Trikafta aged 12+ have the access they need. Together, we will continue to go further until no one has been left behind.

Updates from the provinces and territories on coverage for 12+

Alberta has begun covering the drug, with no upper limit on respiratory function.

British Columbia has not yet made public the access criteria, however they have confirmed that access will be on a case-by-case basis.

Manitoba has confirmed the access criteria. They will not have an upper limit on respiratory function. Trikafta was added to the Exceptional Drug Status program on October 22nd

Newfoundland and Labrador have not yet confirmed the start date for funding in November, or the criteria for access.

Northwest Territories has confirmed they are working toward a product listing agreement.

Nova Scotia has confirmed that implementation will begin in November, start date and access criteria to be confirmed

Nunavut has confirmed they are working toward a product listing agreement.

Ontario has confirmed Trikafta is only available through the Exceptional Access Program, contrary to their original promises that it would be available for “all”. Additionally, the 90% upper lung function limit stays in place.

PEI will begin funding Trikafta on November 1 and will have a limit on funding for those with an FEV1 above 90%. It is our understanding that there will be case-by-case consideration for those above this threshold.

Quebec has recently accepted feedback on the recommendation to limit the funding of Trikafta for those with a lung function above 90%. Cystic Fibrosis Canada provided a submission, calling on the province to use the guidelines developed by CF clinicians. We hope to hear more soon.

Saskatchewan has begun covering the drug, with no upper limit on respiratory function.

Yukon has not yet confirmed the start date for funding within the next two months, or the criteria for access.

Please keep an eye on our website on the Access to Trikafta by Location page as we continue to update with information as it becomes available.

Trikafta is getting closer, but we still have a lot of work to get it into the hands of those who need it. Many private insurers are lagging behind, which is causing access problems for some people. Stay tuned for tools to empower you to raise your voice on social media and traditional media to apply pressure on private insurers to move now.

We are also meeting with individual private insurers and industry bodies to apply pressure and get them to move sooner to fund the drug.

Join us on Wednesday at 2pm ADT / 1pm EDT / 12pm CDT / 10am PT for updates on the latest access news and discussion of strategies to push for access for all who can benefit.