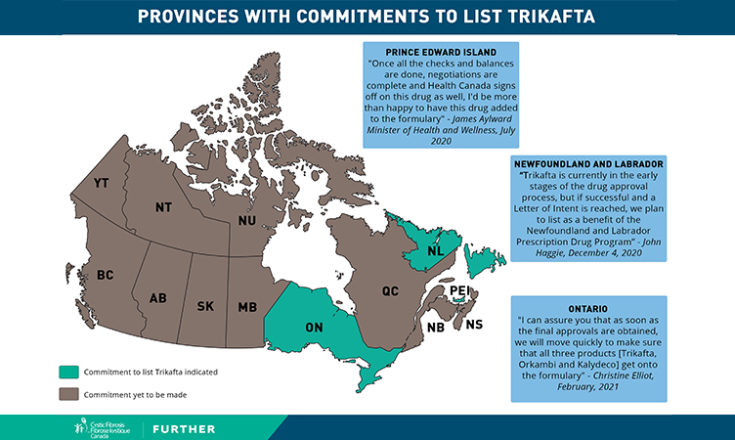 Trikafta’s Progress through the Canadian drug review and reimbursement system

Cystic Fibrosis Canada has sent a submission on behalf of the cystic fibrosis community to Quebec’s Institut national d’excellence en santé et services sociaux (INESSS) for their cost effectiveness review of Trikafta. Thank you to everyone who took part in our recent Trikafta survey and helped us to pull together a powerful and compelling case for the public reimbursement of Trikafta.

The submissions to the cost effectiveness review bodies the Canadian Agency for Drugs and Technology in Health (CADTH) and INESSS are now available on our website in English and French.

We’d also like to thank everyone who took the time to send individual submissions to INESSS. INESSS usually receives around 12 individual submissions for new drugs. From anecdotal evidence, we are confident the CF community has raised their voices to surpass this number significantly, in order to ensure that patients are considered in any recommendations INESSS makes.

Open letter sent to the Minister for Health from 45 MPs

In a great show of support for the cystic fibrosis community, 45 Members of Parliament have signed an open letter to Patty Hajdu, the federal Minister for Health. The letter was an initiative of the All Party Emergency Access to Trikafta Caucus and called upon Minister Hajdu to use her influence to speed up negotiations at the provincial level and ensure Health Canada approves the drug for the broadest indication possible.

The All Party Emergency Access to Trikafta Caucus was formed by Cystic Fibrosis Canada in late 2020 in collaboration with CF Get Loud and Cystic Fibrosis Treatment Society. We are replicating the format in certain provinces to drive fast and fair access to Trikafta, the Ontario Caucus is already up and running and meeting regularly. Similar caucuses will be formed in Manitoba and New Brunswick.

Next steps for Trikafta

We are currently working on a suite of actions to keep the pressure on politicians in the lead up to June when Health Canada and CADTH will release their reviews of Trikafta. Our focus will be on asking elected officials in all provinces to act quickly to list Trikafta on their public drug plans, for the broadest indication possible, once the drug is approved for sale.

So far, we have obtained commitments to list Trikafta from Prince Edward Island, Newfoundland and Labrador and Ontario (pictured). Nova Scotia is expected to make a public commitment as well.

Make sure you sign up for the new advocacy newsletter “The Advocacy Brief” to be the first in the know.

Cystic Fibrosis Canada has given the go ahead to launch an appeal to the court case against the Patent Medicine Prices Review Board (PMPRB). The court case challenged the constitutional rights of the PMPRB, we were interveners alongside Cystic Fibrosis Treatment Society, CORD and others. More details to come.

Cystic Fibrosis Canada has continued to participate in the consultations run by Health Canada for the proposed strategy for high cost drugs for rare diseases. There are two more public townhalls scheduled for Friday March 12 and Tuesday March 23. if you would like to take part, please see their website for more information.

The government is also accepting submissions from individuals on their proposed strategy. You can find more information on how to share your concerns about access to medicines for cystic fibrosis patients on their website. The online questionnaire is open until March 26th, 2021.

We are very happy to welcome Jen Harbin to the Cystic Fibrosis Canada advocacy team. Jen joins us in a part-time role until June 30, 2021 supporting our nation-wide government relations efforts. Jen, mom to Jaimie Lee who lives with CF and received a double lung transplant, is also our Provincial Advocate for Nova Scotia in the National Advocacy Network. Jen can be reached at jharbin@cysticfibrosis.ca

We are also very excited to have Hannah Dolhai, CF Canada Volunteer Coordinator, join the advocacy team to help work with the volunteers of the National Advocacy Network. As an active volunteer herself, with most of her work in the geriatric services sector, Hannah is familiar with the intersection of advocating for communal medical care and the often personal social needs of patients and families. Joining CF Canada in August 2020, Hannah assisted Chief of Corporate Services & Strategic Initiatives, Jeff Beach, in the development of CF Canada’s upcoming volunteer strategy. Hannah joins us in a part-time capacity until June 30.